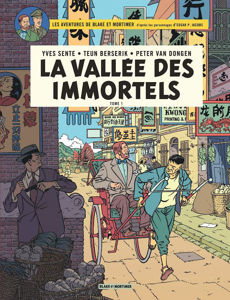 Captain Blake is in charge of organizing the defense of the British colony of Hong Kong in the face of clashes between Mao's Communists and Chiang Kai-Shek's nationalists. In London, Professor Mortimer is interested in a highly coveted Chinese archaeological curiosity. At the same time, Colonel Olrik put himself at the service of General Xi-Li to take revenge on Blake and Mortimer.

Yves Bergeret is a poet and essayist. He knows Cyprus very well, where he comes often and regularly. Observing the paintings of the churches of the Troodos, he understands that the painters of these churches were very active "sign setters" who, going far beyond the simple execution of an "iconographic program", addressed themselves above all to their own. community. The French Cultural Center in Cyprus, by becoming a publisher here, wished to make this very original approach to the orthodoxy of Cyprus accessible to the public.